WARNING: Lots of reading ahead! (If you’re not into long posts, scroll on by.)

Some of you may wonder what that field is in the photo above. When I first started this blog, I used this image as my header image, the fixed image you see at the top of the blog’s home page. I have since changed my blog design, so the field image is no longer the header image.  I’ve inserted it here at the top of this post instead.

The field you see at the top of this post is our (DH’s and my) “Field of Dreams.”  No, we don’t expect Kevin Costner (who played the Iowa farmer in the movie) to turn our field into a cornfield-then-baseball-diamond, nor do I expect the 1919 Chicago White Sox team to show up and play ball. That’s someone else’s story.

This field represents our story, and it’s filled with as much heritage and meaning for us as Kevin Costner’s cornfield meant for the character he played.

Three generations ago, my Great Grandfather Luther S Ely and his brother, my Great-Great Uncle Ed Ely, owned much of the land that surrounded a small lake in the northeastern part of Pennsylvania.  That lake, called Ely Lake, was named for the Ely family who settled the land, the same family from whom Luther and Ed came, and the same family from whom, generations later, I would come.

Around 1920, Girl Scouts from northeastern PA rented a small parcel of land on Ely Lake (the lake was considered a destination in its day) to provide summertime outdoor camping experiences for Pennsylvania girls (this was a new thing then, the idea of females camping). The following year, 1921, the Elys and other forward-thinking locals made it possible for the Girl Scouts to no longer rent, but actuallly own, enough land to establish a permanent camp on Ely Lake’s shores,  That camp, named Camp Archbald, is the 2nd oldest GS Camp in the USA today.

Over subsequent years, Camp Archbald grew, much of their additional land coming from Elys due in part to the Ely brothers’ commitment to scouting and their desire to see Ely Lake preservered for future generations.

While the growing GS camp encompassed Ely Lake’s northern and eastern shores, the Ely family (including Ottos, who were also Elys) retained possession of most of the land on the lake’s western and southern shores.

Fast forward to the 1950s. Luther divided his land among his many children, one of whom was my grandmother. Ed left his land to his children as well, and upon his death, his heirs, having little interest in Ely Lake for themselves, sold the 70 acres that once held Ed’s original cottage and gardens, including 1500 feet of shoreline, to the Scranton Girl Scout Council. That sale simultaneously expanded Camp Archbald and again preserved and protected Ely Lake.

Enter me in 1960.  My immediate family (via my grandmother, one of Luther’s children, and my father who was both an Otto and an Ely) maintained a cabin on the south side of Ely Lake (as did several of our cousins with their own cabins). This was the original land retained by Elys after the GSs took possession of their new camp land in the 1920s and 1950s.

Still with me? Girl Scouts on one side of the lake; family on the other side.

Through the 1960s and much of the 1970s, I spent every summer, from the day school was out until the day after Labor Day, at our family cottage on Ely Lake.  I spent my summer days swimming, fishing, snorkling, canoeing, hiking, berry-picking, playing hide-n-seek, and rabble-rousing with my siblings and cousins (we were a numerous herd). I also spent hours upon hours meandering on what had once been my Great Great Uncle Ed’s land, his homestead, that 70 acres purchased by the GSs in 1959 from Ed’s children. His was my favorite land to explore. The Girl Scouts graciously allowed we Ely and Otto kids to explore the formerly-Uncle-Ed’s-now-turned-their-land parcel when camp wasn’t in session. But we all knew that it was Girl Scout land then (something we respected and honored and frankly felt grateful for). It had once been ours, but it would forever be theirs.

Or so we thought.

Fast forward to 2018. I wasn’t a girl anymore, and scouting, in general, faced financial difficulties (and had been for years). Girl Scouts in the Heart of PA (GSHPA) (which assimilated the Scranton Girl Scout Council, and therefore Camp Archbald, when they merged districts several years ago) decided that selling various camp properties was the best way to fund their growing pension costs.  Camp Archbald, among other rural camps in PA (either in part or in full), was on their to-be-sold list.

Rumor had it that upcoming sales in 2018 would include part of Camp Archbald’s shoreline on Ely Lake. The whole camp wouldn’t be sold, but its less-used acreage would be parceled off.  Which parts of Camp Archbald’s 244 acres would they list, and where?

We Ely and Otto descendents, as well as former Camp Archbald staff, campers ,and current GS members, feared that lakefront parcels put up for sale would be gobbled up by out-of-region real estate developers. We feared non-local buyers, with no feel for the region’s rich history, would divide the land into lots, clearcut the trees, and create high density condos or a resort (complete with oil-leaking motor boats and decible-shattering ATVs). We feared profit-making at the expense of the lake and land.

Please keep in mind, lest I sound elitist, that Ely Lake is rural (truly rural — think dirt-road access only, miles and miles of dairy farms and undeveloped land).  It’s secluded, quiet, and peaceful. It’s a small, unpolluted, fresh-water lake whose ecology land owners have fought to protect for generations. We’ve agreed (for decades and decades) to prohibit motorized boats and engines (including electric) on the lake.  We use only canoes, kayaks, sailboats, rowboats, paddle boards, and the like. We want to protect Ely Lake’s health and ecosytem because it is uncontaminated and rare (so rare in fact that graduate schools, geological institutes, and even the National Geological Society have come to sample its deep, unmixed waters and undisturbed sediment layers resting on the lake floor).  Ely Lake is a gem in need of protection. And its shore was coming up for sale.

What could we do?

With how quickly and suddenly GSHPA listed their properties for sale, including a 70-acre parcel with 1500 feet of Ely Lake shoreline (hmmmm, sound familiar?), we (collectively meaning lakefront owners, friends, family, neighbors, and concerned Girl Scouts) didn’t have time to establish a trust or find a conservancy or scramble to find and pool funds with which to purchase the land.  The land sale was happening too fast.

DH and I knew we had to do something. But we’re not part of the independently wealthy 1%. We’re decidely middle class with a mortgage to pay.

Yet we had to at least try.  As it turned out, DH and I (independently of each other) thought of the very same thing. We knew what we’d do.

By grace and years of hard work on DH’s part, we’d saved retirement monies that we could used to make a reasonable offer on the land. Sure, it meant losing some financial security when we hit retirement (only 4 years away). But how could we not try?

Really long story shorter, when the property sale went live, we made the best offer we could make (no haggling or low-balling). We gave them our highest, most attractive bid up front. We knew we couldn’t possibly win a bidding war so we went all in. It was all-or-nothing.

Again, by grace (and much to my weeping surprise), GSHPA chose our offer over others they received. (It still astounds, humbles, and moves me to think about.)  That precious land, Uncle Ed’s parcel, became ours.

The rest, as they say, is history.

That history includes the field you see at the top of this page. That field is part of the 70-acres we purchased in 2018. It’s the field where I roamed and dreamt as a child and where we now dream our retirement cabin will be.  We plan to build our future home there — right there at the edge of view you see above.  That field has become, in every sense of the words, our Field of Dreams.

If you’re interested, what follows are additional views of the land we purchased from GSHPA last year — the land that was once Uncle Ed’s, then the Girl Scout’s, and now ours. We’ve chosen to leave the lakeshore undisturbed, to keep it as we all remember it and to protect it for future generations.

Part of our hope in buying this land is that we’ll honor our Ely forebears’ legacy of land preservation and protection.  We hope, as they did, that future descendents and Girl Scouts alike will treasure this place, enjoy it, nurture it, and care for it, ultimately ensuring its health and survival for those who come after we’re gone.

In so doing, perhaps the land can serve as not only our, but also their, Field of Dreams. 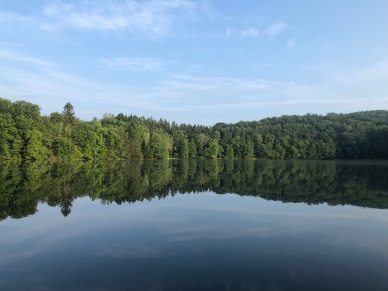 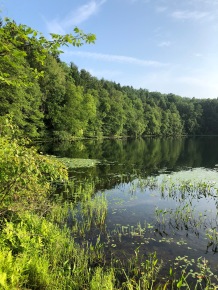 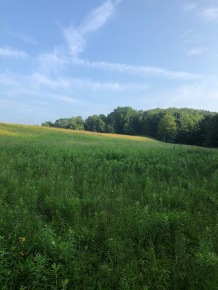 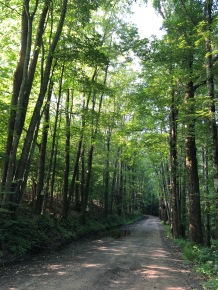 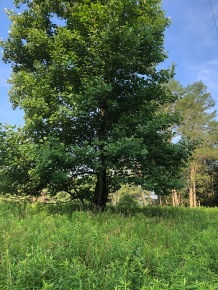 Where Uncle Ed’s cottage used to be 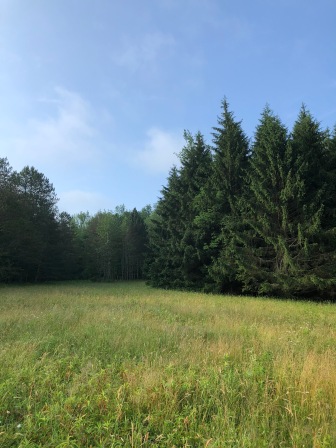 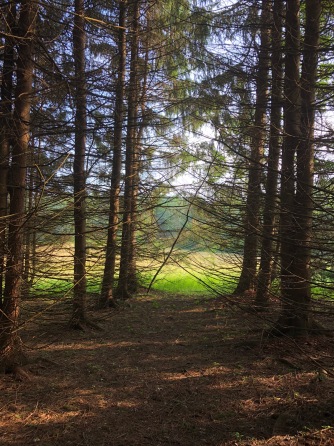 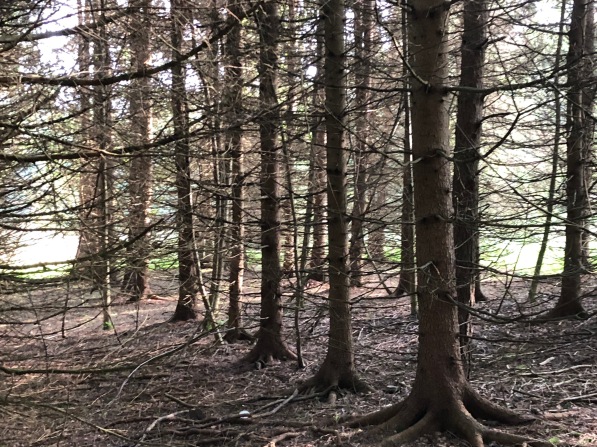 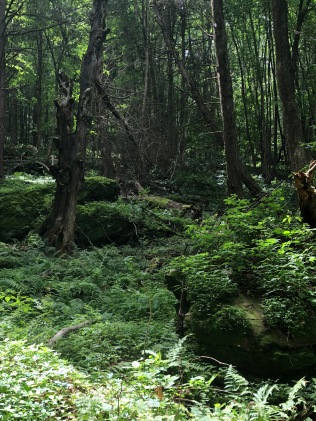 The rocks of Ed’s mountain 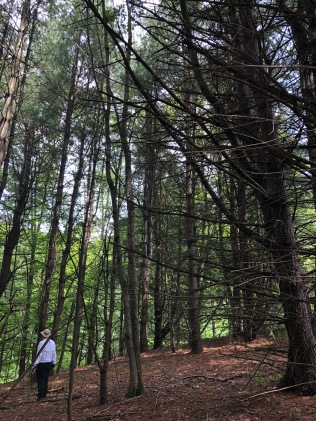 The Woods on Ed’s mountain 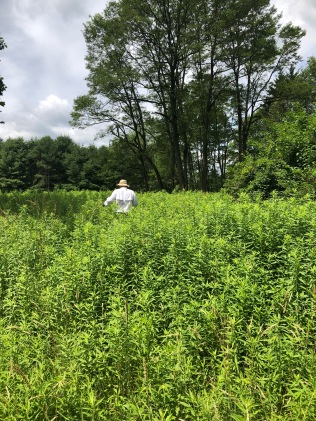 Don near where Uncle Ed’s used to be 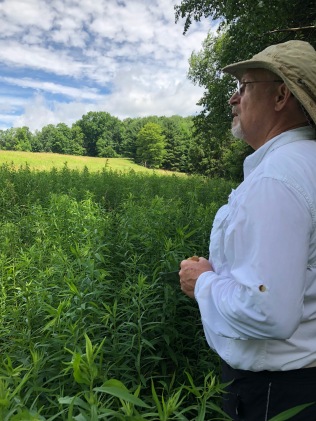 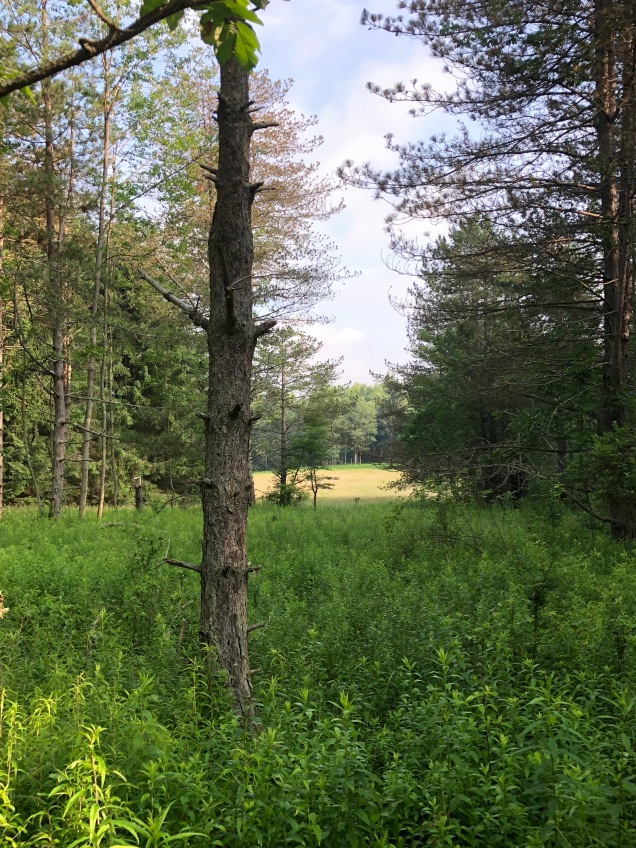 View from the southern end of south field

6 thoughts on “Field of Dreams” 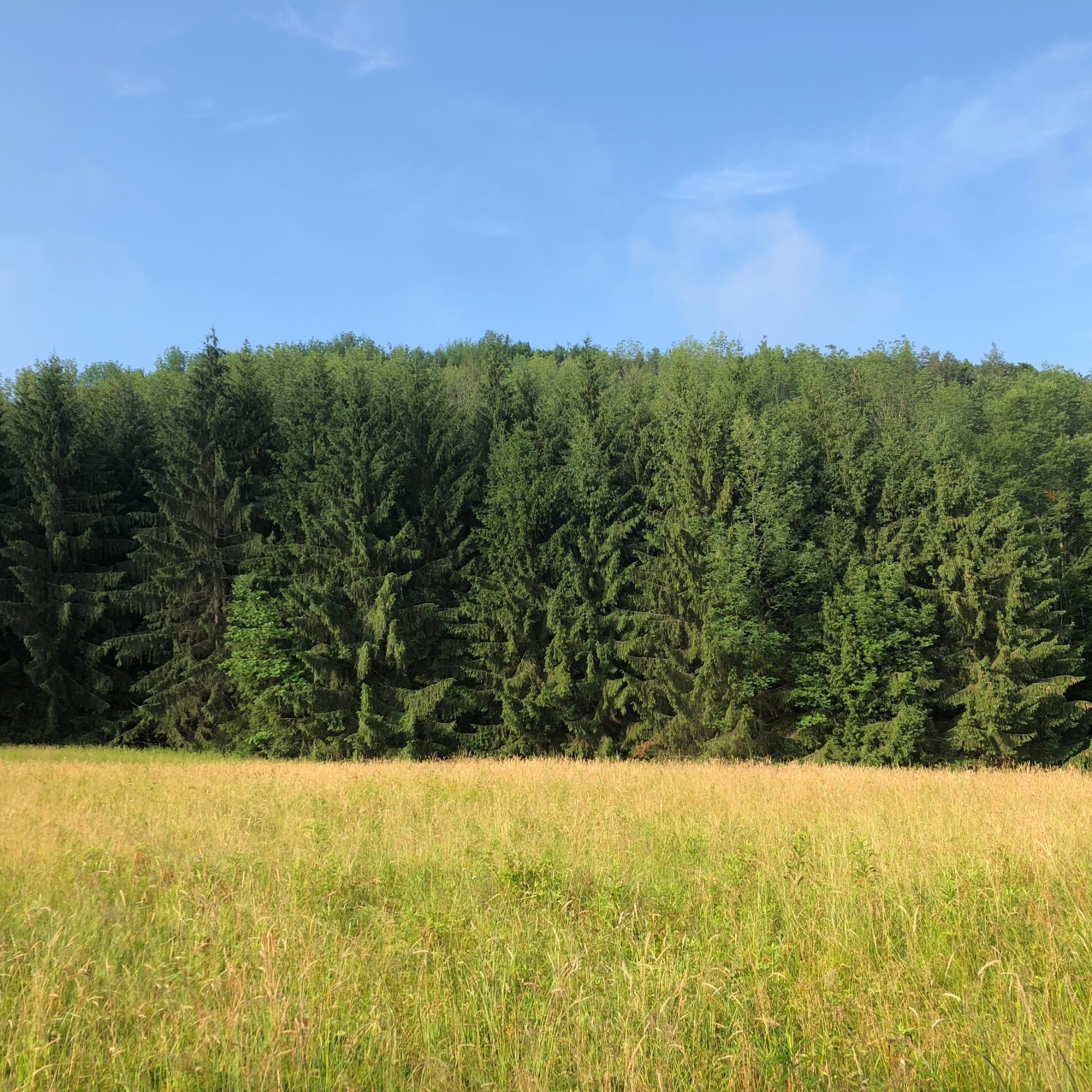 Evergreens at the edge of our Field of Dreams 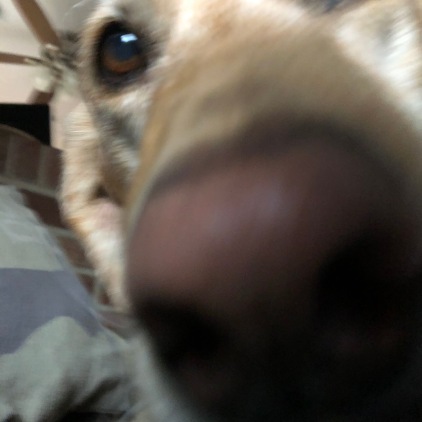 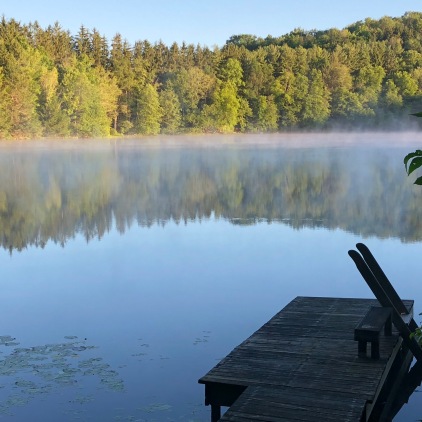 Sunrise shining on the west shore 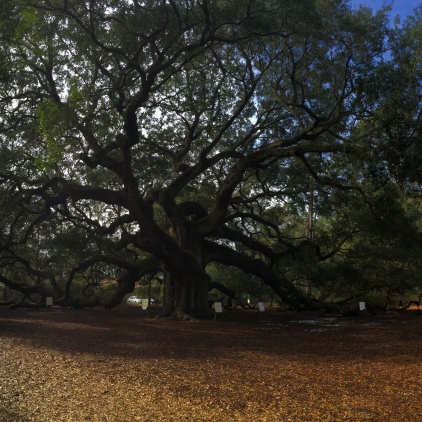 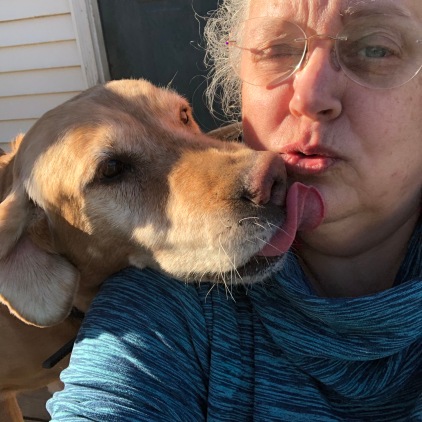 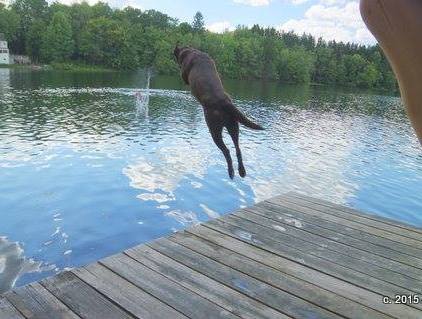 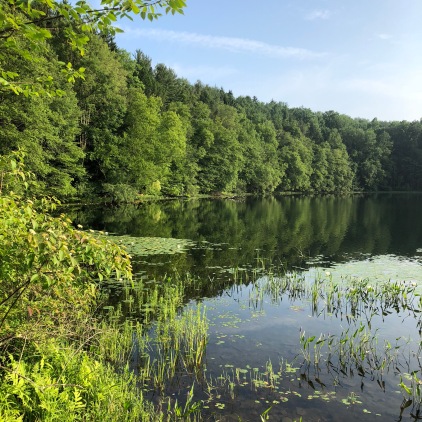 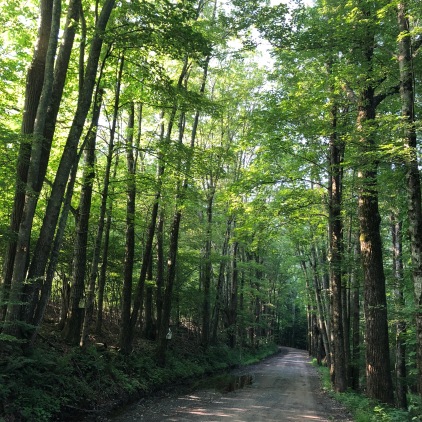 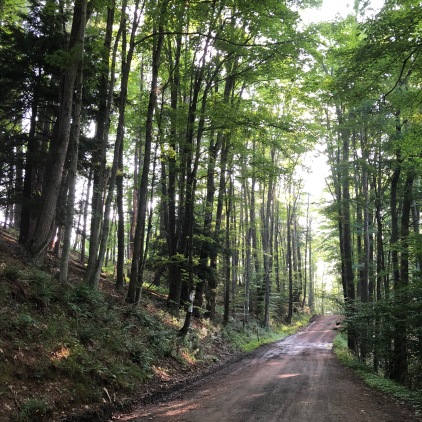 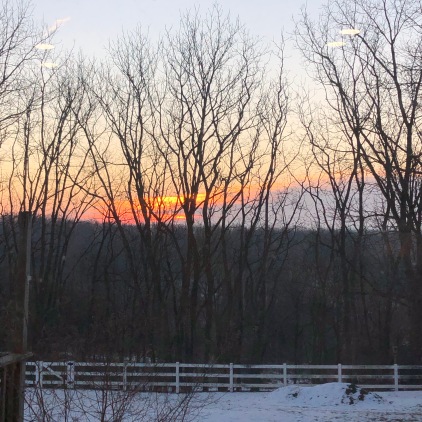 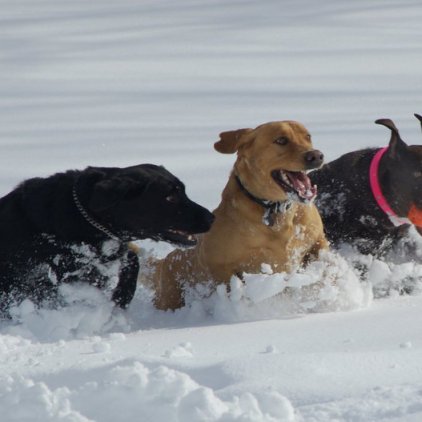 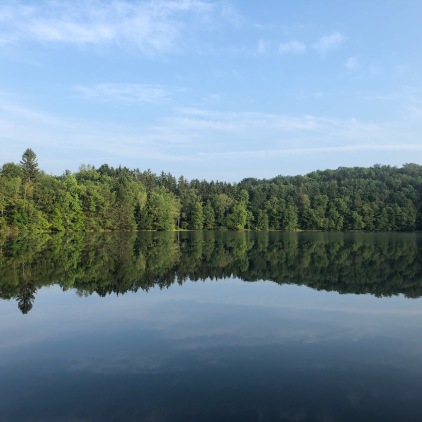 The Woman Behind the Ramblings 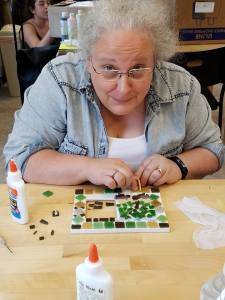 What Do Those Letters Mean?

Without storms there'd be no rainbows. Though it's difficult to see in this pic, we were blessed with a full double rainbow this evening. 🥰
And, Mom's momma robin returned to Mom's back porch to lay her eggs again this year. I think there are four babies in there, but it's hard to tell, and I don't want to disturb the nest. Soon enough they'll be easy to count when they start bobbing their heads in competition for worms.
Mom's Rhododendrons (purple and red) and Azaleas (red) and multicolored Roses are blooming. They're just gorgeous.
Chives in the front garden bed soaking up the sun.
It's too hot out here. Time to let myself in (says Merlin).
So glad to have native Blue Flag Iris plants growing in our untended garden bed. Nature reclaims itself.
%d bloggers like this: